At the end of March of 2020, the game developing studio Greentube (owned by Novomatic) released the Ghostly Towers slot into the iGaming industry. Impressing everyone with a “snappy-quick” gameplay and a slew of bonus features, this Novomatic slot is one that will continue to remain popular for the years to come. Its customizable nature allows online casinos to make it available for both casual players and high rollers, making it interesting to a broader demographic. Read our full review, and you will find out everything about the Ghostly Towers slot!

The Visual Theme and Storyline of the Ghostly Towers Slot

Not many new slots today can match the visual quality and clarity of Ghostly Towers. The game not only looks superbly but also has an “underlining storyline”, which depicts the ghost “Pierre” and his escapades within a haunted mansion. Pierre’s different antics aren’t just for “visual effect” but are actually connected to the different bonus features within the game itself.

As most people can tell, the Ghostly Towers is a mobile slot through and through – the “portrait” design of the interface is made to accommodate smartphone users, but the game also looks incredible on computer and tablet screens as well. Due to the fact that it was developed on the software platform HTML5, the game is more than responsive to be properly resized on a variety of platforms without it losing any quality!

This new slot has a total of eight symbols, five of which pay a lower amount of money, while two of the eight are classified as the “high-paying” ones. The eighth symbol is called “free spins” (FS), which already explains what it does. Moving in the same direction – if a player gathers three, four, or five FS symbols (FSS), they will receive five free spins in total; what will be different, however, is the actual number of special “gems” that are earned.

Staying true to its “5×3 rolling reel layout” modus operandi, the newest game of Greentube seems to be standard – but that’s all there is to it. Almost all elements clearly deviate from the usual norm that is exercised by the developer when creating its slot titles, and honestly, it is a welcome change. The best way to experience the different features of this game is to play the Ghostly Towers slot for free!

The gem system in the Ghostly Tower is the main currency for receiving additional features. Every different gameplay extra has a designated gauge that fills with gems when FSS are collected in a successful spin of the reels. Three FSS will grant 6 random gems; four FSS – 8, and five FSS, 10 random gems. You can read more about the bonus features themselves below.

During regular or FS gameplay, the ghost Pierre will appear and randomly add up to 15 wild symbols. This is an exceptional slot feature that not only increases the chance of receiving a prize, but also the prize’s value. The “wickedly weird wilds” are triggered after gathering six red gems.

After collecting six green gems, players will be treated to a hefty win multiplier. Depending on a player’s luck, their wins can be multiplied up to x20! We should mention that just like any other additional features, the “mental multiplier mania” can also appear during base play and free spins mode.

The symbol replacement mechanic just got a bit more exciting – when six of the blue gems are collected, the ghost Pierre will “slash” away a number of symbols on the reels (one or more). All “disappeared” symbols are exchanged for matching ones; the new resulting combinations will be paid in full.

Insights on How to Play Ghostly Towers Sloty 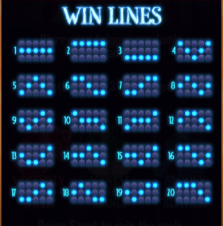 Although the many bonuses here make the impression that the slot is a bit more “advanced” to play, it is actually simpler to operate than most. All you would have to do is choose your preferred bet. The min-max betting range is 0.20 – 40 (coins), and whatever the player selects will count as the “total bet”, although the game has 20 fixed pay lines. Considered to possessing a medium volatility factor, the Ghostly Towers online slot might not provide any huge payouts, but it will grant wins more often than not.

The RTP of the slot is 95.15%, and if we are to judge by industry standards, we wouldn’t say that this is much. On the other hand, the high paying symbols will make sure that there is a decent prize (according to the size of a player’s bet) for the right reel combination. If a player bets the maximum coin value on a spin, they will get 120 coins for the “Pierre” wild symbol combination (of five), and 80 coins for the “spooky castle” symbol. While this isn’t considered to be a lot, the real value comes from the prizes being multiplied by the feature. A potential multiplier of x20 with a 120-coin prize will equal 2,400 coins!

There is no doubt that Ghostly Towers is one of the best slot games to this days. Its numerous bonus features, coupled with a quirky design and superior optimization, make the game a real gem in the iGaming industry. The fact that multiple bonus features can be won and triggered at the same time expands the gameplay even further, making this title more than just your “run of the mill” slot. We wholeheartedly recommend that you play this Novomatic slot, and you might just discover that it is perfect for a few real money wagers as well!